Does Fred Sandback want us yawning about yarn? asks ARCHIE WILCOX (and is that the point?) 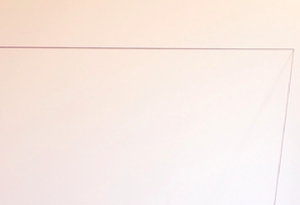 The infamous Kübler-Ross model of grief (from denial and anger, through to depression and grief) has been picked up, over-popularised, de-natured – but remains a handy metaphor; looking through the past catalogue of Fred Sandback (1943 – 2003), I would now posit the “Sandback model of artistic response”: from astonishment to delight, leading to despair and, finally, boredom.

To begin then, at the beginning, what are we to make of the “astonishment”?  To deny it would be foolish:  softly stepping into the world of Minimalism, Sandback allows us to participate so fully with his works (he himself called them, drily, “pedestrian” works), that they can almost overwhelm.

Make no mistake, in the late 60s, it would have astonished, and – initially at least – it does so now.  It is no mistake to refer to this initial moment as the most obviously “religious” of his works.  None of the sharp light, the angry lines of other Minimalists here (nothing like, say François Morellet); the infamous yarn, the purring acrylic.  These are woven like, say, the Morae’s threads, at the same time as having (in their modern lines, their existential tautness) every single bit of the 60s aggressive newness.

“Delight”, then follows.  It’s something you experience especially with Untitled (Sculptural Study, Seven-part Right-angled Triangular Construction), a 1982 work currently on show at the Whitechapel Gallery in London.  It brings to mind, at once, something like Spender’s “final innocence / To save from dust”.  Triangular, multi-coloured – horizontal.  To step in the room with the piece alone is a spectacular joy – try to get there when the room is empty (better still, speak to other patrons and ask if you can go in at different times); to do so is to have a brief, dazzling sense of what it is to have felt those first Minimalist works.

And so, alas, to despair and boredom.   All those planes, all those lines: they exhaust and they enervate.  The movement of air between spaces – such faddishness can only provide the glow of a falling star: warm, bright, inconsequential and soon over.   Looking, for example, to his prison-like Untitled (Sculptural Study, Two-part Vertical Construction) from 1986, is to disappear into as bland a commentary on minimalism as there is.  We are developed beyond this – this torturing of space, this re-lining of lines.  It is firework art, it is the light from a match, it is silent in the end, and despairing.

This entry was posted in Art. Bookmark the permalink.